It’s been some time since I have been able to post to Kendall’s blog. Although I really don’t have a great excuse, I do have a good one. On March 5th, we added Calien Olivia to the mix and the new addition to the family has been a fun and consuming time for us. Now with 3 kids under 3 years old around the house, things are a little hectic to say the least.

The title of this posting reflects the time frame since we found out about Kendall’s diagnosis. It’s been just a little over 12 months and just about a year since her early intervention program started. We now have a time segment that we can use to measure her development and progress since she has been receiving all of her therapy. I will get back to her development later in the posting.

The last few months have been interesting. My last post was written from the hospital and when we arrived home on the 4th of March, we were settling in just to go right back to the hospital on the 5th to deliver Cailen. Cathy had a scheduled c-section for the mid day and we were glad that Kendall was home in time for us to get back in for the new baby. Only, 4 weeks later, we ended up in the hospital again to treat another respiratory virus that Kendall had picked up. In fact, it was diagnosed as pneumonia this time around. Not uncommon to us, we gathered a few days worth of goodies and headed to the hospital for another stay. This time, Cathy stayed with Kendall and I stayed home with Cailen and Carsen. There is a silver lining to get the time with the kids without Cathy around since they want more to do with her than they do with me… Regardless, poor Kendall had to go through another round of doctor visits and a stay in the hospital that seem to be tougher for her to take. She is starting to dislike people in hospital attire and would cry at the sight of unknown faces. The schedule for us during this trip had Cathy spending the nights with Kendall and me spending the days at the hospital so Cathy could come home, spend time with Cailen and catch up on sleep. It seemed to work out well. After a few days, Kendall was able to come home. Overall, outside of the danger of her getting extremely sick, the largest impact to her getting sick is the effect on her nutrition. When she goes through these spurts of coughing and breathing difficulties, she usually throws up whatever we have put into her through her feeding tube. She has a hard time keeping any food down and the result ends up being a scare for us as she is not able to carry out her feedings. After this hospital stay, it seemed as if she lost weight and to this day, she doesn’t seem to have gained it back. The last doctor visit had her weighing in at just under 20 lbs.

So, in regards to her weight, she does seem to be a thinner kid since she was released from the hospital in April. She looks longer, but we see her weight loss more so now that Cailen is around. Cailen is close to 15 lbs and she is not even 3 months old! They look almost the same size and Kendall is approaching 2 years old. Cathy has done a great job of working on Kendall’s nutrition and making all of her food. We even broke down and bought a Vita-mix blender, which runs about $500 after taxes! Supposedly, this thing will puree anything (it better for $500!). So, Cathy is going to try some new stuff and hopefully Kendall will get more calories from the new experiments that Cathy will be jumping into this next week.

We have been giving her less formula over the past month or so because she is so much more active in her crib. Since she has had the feeding tube, she would get between 10-12 ounces of formula while she sleeps which equates to about 1/3 of her daily formula intake. About a month ago, we found her twice wrapped up in the line that runs from the pump to her G-Tube. It’s not so bad as long as the tube does not fall out or get disconnected, but we had a scare when the feeding bag line was wrapped around her neck. We started to fear that we would wake up with her strangled by the line and decided to end that form of feeding. So, now she gets about 5oz from when she goes to bed until I go to bed, which is about 2 hours. We try to get as much in her as possible during that short time frame. I then unhook her when I go to sleep. We know for certain that this has clearly affected her diet. We are still looking for ways to replace this intake and to get her back on track.

Additionally, her feeding by mouth has been going better these days. Her oral intake has been one of the main focuses of her development. For the most part, she still doesn’t like to put things in her mouth. She has made some strides in the past month and is more open to the idea at dinner time. She likes eating more from Cathy than she does with me. The whole concept of knowing that when you eat, your hunger goes away, is still a foreign idea to Kendall. We hope that one day she will eat on her own and will not need her feeding tube. Personally, I think that she will always need assistance with feeding and it will be up to us to make sure she gets her nutrition.

On the development side, she is starting to do more activities. One item that seems to be clicking for her is the use of her hands. She is more motivated to go grab objects or toys that she sees in her sight. In the past, she wouldn’t really focus on anything that is outside of her reach . As of late, she is getting her stimulus from grabbing these objects and reaching to discover what they are. This is a huge gain for her. She is also getting herself into a sitting position and onto all fours. These are both big steps for her in working her way to walk. Cathy and I both still believe that she will walk one day and seeing her progress in these areas gives us hope.

Her speech has only changed in that she makes new noises. She does not say any words and we don’t see that happening any time soon, if ever. Unlike our hope that she will walk, we are not clear where her verbal communications will end up. In fact, we got news today that she needs to have tubes put in her ears. Over the last 2 months, her left eardrum burst twice. We have no idea as to why this happened, but she has not been able to clear her ears of fluid and it seems to be a very painful experience for her. The ear, nose and throat doctor decided today that Kendall will get tubes next week and hopefully this will help her hearing. Although we don’t expect her to talk at a normal level, it is possible that some of her delay has been due to the fluid in her ears. The doctor said that this fluid causes her to hear as if she is under water. We will soon find out what, if any, gains will occur by her having clear hearing. It’s just one more thing…

On a good note, I have become an expert in replacing Kendall’s g-tube. A procedure that cost $2200 in January, will now cost us $0 going forward. I have since replaced her tube 3 times and feel very comfortable with the whole process. It’s not a pleasant experience, but a necessity for her health and a large savings for us.

Other than all of these new things, she continues to be a great baby and a happy kid. She is always smiling with this funny grin on her face and is delighted to be alive. She laughs all the time and is very ticklish. Carsen loves to use her as his play toy and she enjoys it just as much. It will be fun to see how Cailen fits into the mix as she develops over the next 6 months. 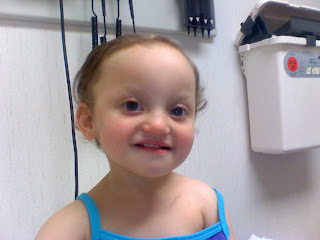 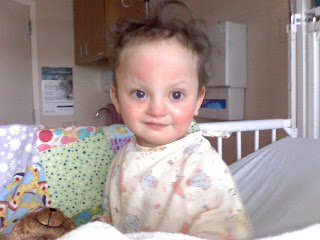 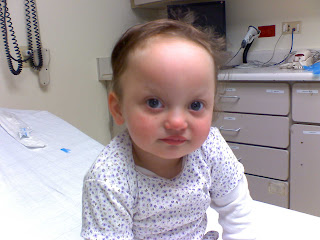 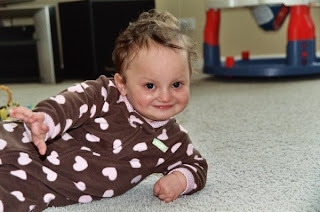