It’s been a while since I posted and I aways have the desire to do so, but not so much the time.

Kendall has been doing so much in the past month or so. The year started out with a scare as she woke up on January 2nd with her feeding tube out of her stomach. We immediately had to take her to the ER to get another placed before the hole sealed shut. It was a long process and a few hours later, Cathy and Kendall made it home. Had we gone another few hours, she would have had to go through the surgery again to get it replaced. A scare, but standard maintenance based on what she has already been through…

We ended up firing Kendalls OT (occupational therapist) since she did nothing but make Kendall cry. She was without OT for about 3 months until last week. A referral from our speech therapist came available and the first session seemed to go well and Kendall warmed right up to her. She is still taking therapy 4 times/week and she is making some strides developmentally. She is able to look at things in front of her and automatically go out and grab them. It’s taken a while for her to get the hang of this, but she is really doing well at visualizing items and acknowledging their presence.

A much larger accomplishment for her occured in the past few weeks. She loves to stand up and bear weight on her legs. We think the new perspective she is getting is something that is exciting for her. She can’t walk or move her legs, but she holds herself up real well. We have been waiting to get approved for a stander for the last 3 months and we just got it in last week. We call it the torture chamber. Carsen even likes to get strapped in because he thinks it’s fun. She’s been able to use it about 2 times per day until she gets tired standing in it. The concept is to get her bearing more weight on her legs and hips and to be put into the position of standing. So far, it works pretty well, but she has a long way to go before she can stand on her own. She still can’t get herself into a sitting position and she surely won’t be standing if she can’t get herself up.

Outside of the developmental stuff, the real big struggle we continue to have with Kendall is her feeding. She takes the bottle no problem now. That is good in of itself because she can control the intake and it helps her understand the whole eating/hunger thing. She doesn’t like much else to go into her mouth unless she is really hungry. The only things she eats are pureed fruits and vegetables and a few small crackers that dissolve in her mouth. Anything that requires a lot of chewing usually gags her and she ends up in a throwing up fit. This area of her development is still so slow and we have to reply on her feeding tube for her to get her nutrition. Cathy has been making all of her food the past 4 weeks or so. She has really taken the initiative to get her all kinds of foods and has learned how to take sweet potatoes and other items like brussel sprouts and turn them into near liquid. Kendall’s favorites are Avocado and Sweet Potatoes.

Overall she is so happy and doing well. We’ve never seen such a Happy baby and we are convinced that she enjoys every day. 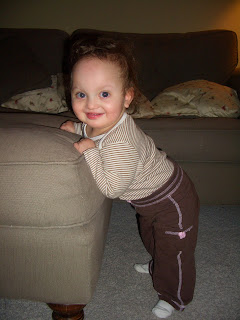 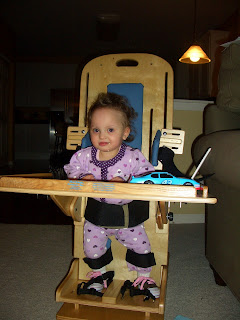