It’s amazing to think that Kendall is already almost 1 1/2 years old. We sometimes joke that we have had a 6 month old for almost a year. Not so much a joke, but a neat adventure for us since she is learning at a very slow pace and we get to enjoy every moment with her.

Over the past few months, we have been pushing all of her doctor visits and tests in to hit the year end deadline. For once the clock strikes 12:01am 1/1/09, we start all over with the health benefits deductible. We maxed out in 2008 some time in April of this year. Everything since then has been free (including formula!).

So, the last round of tests for Kendall were on her Kidneys. We found out in an earlier ultrasound that her right kidney is very small and in her pelvic area, obviously where it is not supposed to be. The final test for her kidneys was completed a few weeks ago and we found out that they seem to be functioning normally. This is great news since most WHS kids have major kidney problems. Actually, we have been somewhat lucky since the extent of her syndrome has basically left her developmentally delayed. We have been void of all the other issues that come with this disorder. So, bottom line on all of the doctor visits this past year is that she is delayed mentally and physically. As we move into 2009, we plan to be on cruise control with her. We know what she faces and we are fortunate that she is most likely in good shape regarding her health. We always need to be aware of seizures and that remains a concern. All else is good with her and she continues to grow and stay plump.

The past 30-45 days have been very good for her. She continues to have therapy 3 (used to be 4) times/week. We fired our OT person since Kendall didn’t like her too much. This therapist is the only person that Kendall cried to when she was around. It was somewhat strange since she loves her other therapists. We’re still looking for another OT once our early intervention contact gets back from what seems to be a 2 month vacation… So, her last month or so has been somewhat successful. She can now be in a sitting position, but she can’t get there herself. She tries with great strain to pull herself up, but just can’t do it. This new found strength in her core seems to also be helping her with feeding. She has been consistently been eating during the day by mouth which is a HUGE accomplishment. Our biggest struggle with Kendall has been her aversion to eating. She never seemed to have the concept down that eating will rid her of hunger. We might be turning the corner as she can now take a bottle without doing it in her sleep. With Kendall, we realize that as parents we take for granted that babies need to eat and naturally have an interest in fulfilling hunger. Kendall, now 16 months old may have finally figured it out. We still struggle with her eating solids, using a sippy cup or using nipples other than the ones that she used while in the hospital. She is starting to enjoy eating soft baby food, but will most likely gag or vomit if she eats anything with texture. On occasion, we can give her those little stars that dissolve in her mouth. She does ok with them as long as they don’t land on her tongue. It’s a very slow process and it requires that we be patient (Cathy is much more patient than I am) and work with her to start enjoying her foods. We have to give much of the credit to her speech therapist (Holly). She has been tremendous and is genuinely working hard to help Kendall progress. We can’t be happier with having her be a part of Kendall’s life.

On the development front, she is also making some good strides. In the past few weeks, she has been grabbing items in her reach with both hands. This has been an area that we haven’t understood much. In the past, she will not reach for anything in her reach or even seem like she can see it. After having her eyes checked, we know that she can see and should be able to notice items in front of her. The whole reaching and grabbing is starting to come around, but is not a natural tendency for her. She is also starting to put weight on her legs, only with assistance. She is far from walking and still has a way to go with crawling. Her physical development is also way behind, but the good news is that she is developing in the order she should be. In other words, she is progressing and doing the things that she should be doing in the order for which it is expected. All of our experts tell us that if she was doing things OUT of order, there would be a problem. They all believe that she will walk one day; we just don’t know when.

As always, each day is a new day for us as we take them one at a time. We enjoy her so much and she is probably the happiest baby we’ve ever seen. It’s her smile that keeps us going during the rough times with her… 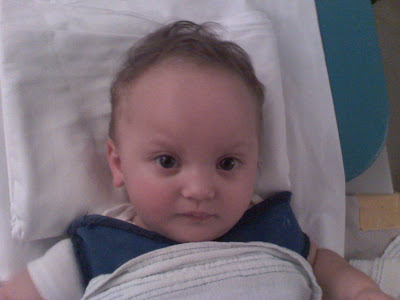 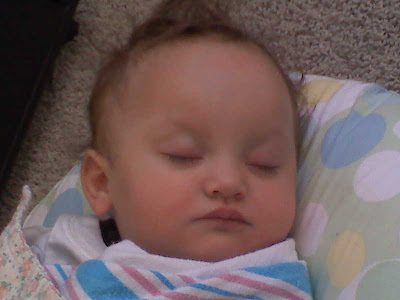 Kendall is the most peaceful sleeper… 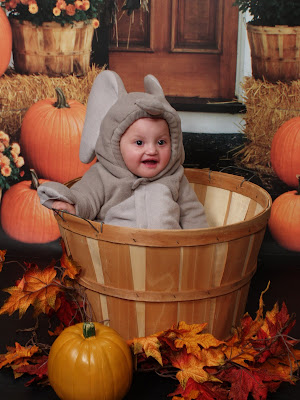 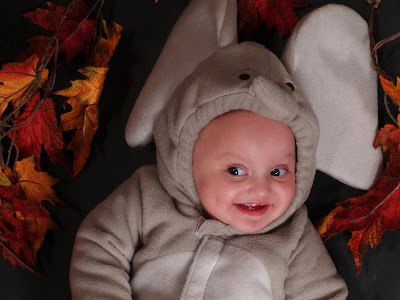